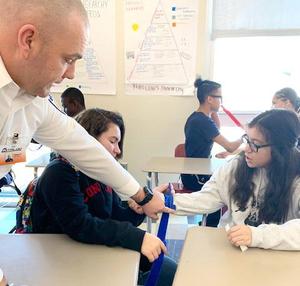 EHS Students Learn Life-Saving Lessons
Everett High School's Health Science Pathway, along with School Resource Officer Stephen Ramunno, Cataldo Ambulance’s Tommy Richer, U.S. Army National Guard SFC Mark Mulry and SPC Widmac Laterion, both of the U.S. Army National Guard and Cataldo Ambulance, hosted a training of more than 500 students on how to stop bleeding in emergency situations.
This training, which was similar to the national Stop the Bleed campaign, taught students and their teachers to recognize life-threatening bleeding and to intervene effectively. The goal of the campaign is to encourage lay people to become immediate responders and empower them to take life-saving action if quickly needed- regardless of the situation or cause of severe bleeding.
Stop the Bleed is a national awareness campaign and call-to-action. Stop the Bleed is intended to cultivate grassroots efforts that encourage bystanders to become trained, equipped, and empowered to help in a bleeding emergency before professional help arrives.